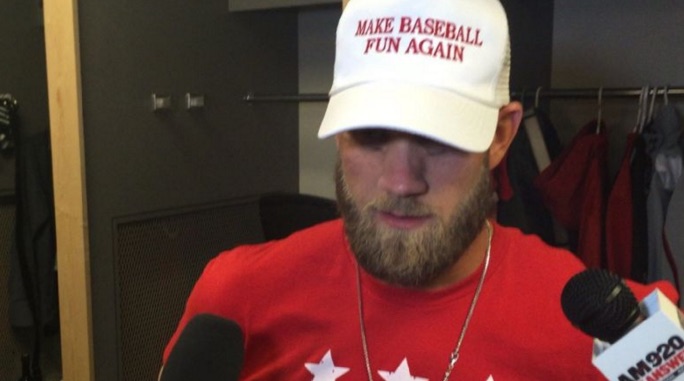 And here's his reasons for wearing the cap. It's basically an argument with baseball traditionalists:

“If a guy pumps his fist at me on the mound, I'm going to go, 'Yeah, you got me. Good for you. Hopefully I get you next time.' That's what makes the game fun. You want kids to play the game, right? What are kids playing these days? Football, basketball. Look at those players — Steph Curry, LeBron James. It's exciting to see those players in those sports. Cam Newton — I love the way Cam goes about it. He smiles, he laughs. It's that flair. The dramatic.”

Now I'm a Minnesotan, so bound by law to be a fan of the nondescript. When I was growing up in the days of Billy “White Shoes” Johnson, the Bud Grant-led Minnesota Vikings didn't even spike the ball; they just dropped it in the end zone like it was their job. I always liked that. Plus Cam Newton? Ewww. I'm a Seattleite now, so pick a Seahawk if you want me on board. Richard Sherman. Michael Bennett. Marshawn Lynch.

Even so, I'm not averse to what Bryce is saying. But the cap? Let me count the ways it's a bad idea:

On the plus side? Since Harper wants to be demonstrative, and wear his hair crazy, and make baseball “fun again,” he's that much less likely to sign with the New York Yankees after the 2018 season.