It's a vague memory.

My parents were at Pearl Park on a Sunday afternoon playing volleyball but my brother Chris and I didn't go. Had I been sick? (I was a sickly child.) Was I faking it to get out of going to Pearl Park? (I didn't like Pearl Park much.) Or was it because the Twins were on TV?

That afternoon, they were playing the Orioles in the American League Championship Series, but for some reason my father thought they didn't have a chance. And he was right. He also probably wanted us to get out and exercise in the fresh air rather than watch our professional athletes lose to their professional athletes on the boob tube. He was right about that, too. But Chris and I stayed behind. 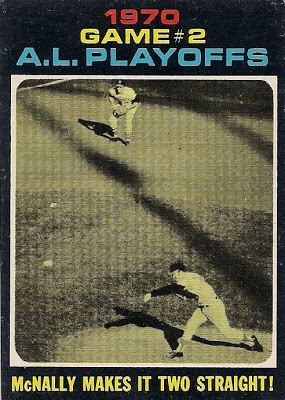 Here's what I remember. At one point in the game, the Twins two best players, Harmon Killebrew and Tony Oliva, hit back-to-back homers, and Chris and I went a little crazy, throwing throw pillows around and generally mucking up the living room. I remember it being a kind of futile celebration because the Twins didn't win. (They didn't win any of those ALCSes against the O‘s.) We also didn’t clean up after the celebration, so when my parents returned home from volleyball, the living room was still a mess and we got chewed out for it. I remember thinking the chewing out was somehow unjust. “But Killebrew and Oliva went back-to-back!” I said, or something like it. No good. We were punished in some way. The Twins were punished in another.

Here's what I wonder: Why do I remember this?

Here’s what I love about the Internet: I can find out the exact day that happened.

Even pre-Interent it would‘ve been fairly easy with the right book. It was obviously one of six games—the two best-of-five series the Twins played with the O’s in 1969 and 1970, in which they never won a game. Just get the box scores. Find out when did Killebrew and Oliva both hit homeruns. See if it was in the same inning.

But with the Internet, and BaseballReference.com, it's so much easier. Bing, boom.

Looking over the game, the 5th innning is when it gets interesting. First, the O's loaded the bases with nobody out when Stan Williams was summoned to replace Bill Zepp. He got: foul out, fly out, strike out. Nobody scored. Nice! Then it was the Twins turn for futility. With one out, Stan Williams (again) walked, Cesar Tovar singled, and Leo Cardenas singled. Except for some reason Williams was sent home on a single to left and was thrown out at the plate. So instead of the bases loaded with one out for Harmon Killebrew, it was two men on with two out, and Harmon popped up. We had a chance to chase O's starting pitcher Dave McNally. Instead, McNally went the distance, and even hit a double in the top of the ninth to start a seven-run rally that really drove the nail into the Twins' coffin. Final: 11-3.

By this point, though, I was probably getting reamed for the messed-up living room.