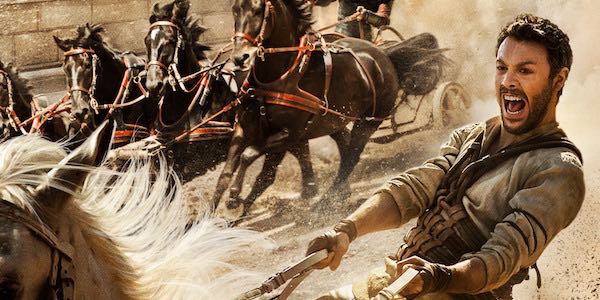 Scream all you want.

“Suicide Squad” dropped another 52% to $20 mil, which would've been third place two weekends ago and fourth place last weekend, but this weekend it's good enough for first. “Sausage Party,” the raunchy, anthropo-mocking animated film from Seth Rogen and company, came in second with $15 mil. In its second weekend, it dropped 55%.

None of the new big releases did well:

This last is the shocker. The film got so-so reviews, but I heard the filmmakers heaped on the Christianity to get out the faithful. Didn't work. The movie that was the second-biggest box-office smash of the 1950s (after “Ten Commandments,” $848 million adjusted) couldn't even win its late-August opening weekend in 2016. It finished in fifth place.*

I've said it before: a religious movie alone doesn't cut it (see: “The Nativity”). To become a hit, it has to become embroiled in the culture wars (“Passion of the Christ”; “God's Not Dead”). Being devout is all well and good, but the faithful want to rub someone's nose in it—Hollywood's, if it can. I suppose they just did.

Anyway, I'm bummed “Suicide Squad” is still humming along. Two weeks ago I predicted it would top out at $270, but now it's at $262. Where will it stop? $300, more likely. Short of that, if we're lucky. Last week I had dinner with a friend who was a fan. Or at least he saw “Suicide Squad” and liked it enough. I brought up a few of the issues I had with the film, its overwhelming stupidity, that it's just chunks of story placed together without thought for what connects them. I brought up the scene where Deadshot has to prove himself to Flag by firing weapon after weapon at cardboard cutouts. Why does he have to prove himself? Isn't Flag an underling? Isn't Waller the boss? Why does nobody else have to prove himself? And isn't it a little dangerous to be giving all of these weapons to this stone-cold killer—particularly with the sadistic guard he wants to kill right next to him? “Sure,” my friend said. “When you think about this stuff afterwards.” “No,” I said. “I think about it during. That's why it's painful.”

* ADDENDUM: The actuals have come in, and “Ben-Hur” actually finished in sixth place. Same gross but “Pete's Dragon” surpassed it.