From her autobiography, “The Lonely Life, which I was reading last night. Middle of the night, actually. Insomnia. You know.

The first passage is about one of Davis' breakthrough performance in Vergel Geddes' ”The Earth Between“ at the Pronvinctown Playhouse in Greenwich Village in March 1929. After opening night, she and her mother, Ruthie, are reading the reviews, including one by St. John Ervine of the World: 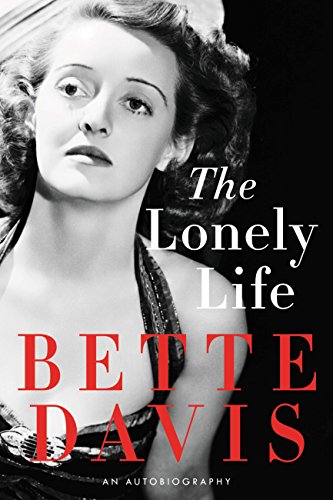 He loathed the whole evening with a passion but interrupted his brilliant invective to remark that our other play was ”remarkably acted especially by Miss Bette Davis.“ Ruthie screamed. I started skipping the texts and looking for my name—unabashedly. After all, that's what mattered. One after the other—the News, the Graphic, the Sun, Telegram, Mirror Journal, Brooklyn Eagle—all of them were excessive in their praise. It had come to pass and Mother was crying. We had saved the Times for last and now Ruthie hysterically quoted Mr. Atkinson. ”Miss Bette Davis who is making her first appearance is an entrancing creature who plays in a soft, unassertive style.“ I fell back on the pillow in relief.

Then this passage, about the curtain calls after she played Hedvig in Ibsen's ”The Wild Duck,“ which starred stage icon Blanche Yurka, a few months later:

Then up went the curtain again, and the whole cast once more joined the star. The audience is certainly extremely responsive this evening. There was a certain persistence in its ardor—an ungratified passion. The audience seemed insatiable. Suddenly Miss Yurka took my hand and led me to the footlights and the curtain fell behind us. This was a tremendous honor and most gracious of her. But then she let go of my hand, smiled that secretive smile of hers and walked off the stage—leaving me alone. The theatre now shook with applause and bravos. People actually stood on their seats and cheered—for me. It was really just for me. Wave after wave of love flooded the stage and washed over me. I felt my face crumble and I started to cry. The weight that was Charlie [her fiance, who had broken off the enagement] was lifted like a miracle. ”Bravo! Bravo!“ I was alone—onstage and everywhere; and that's the way it was obviously meant to be. ”Bravo!“ My first stardust. It is impossible to describe the sweetness of such a moment. You are at once the indulged beloved and the humble lover. Alone! All those marvelous people. My heart almost burst. This was the true beginning of the one, great, durable romance of my life.

Can't wait until she sinks her teeth into Jack Warner.