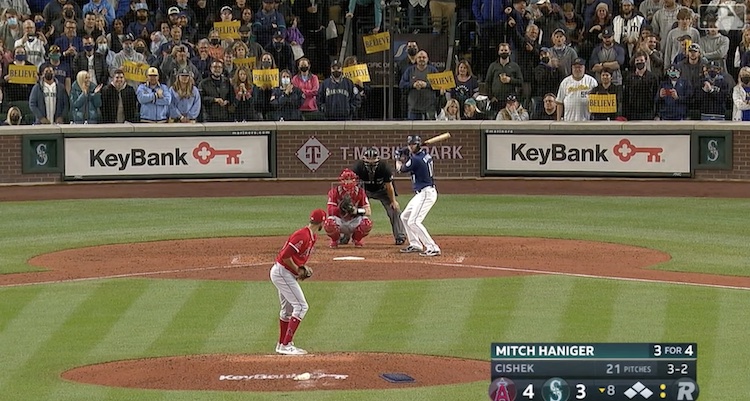 Turns I went to the wrong game.

That wasn't an issue in '95, when I went to all the games, practically. I remember when I missed one because I had to work the cash register at University Book Store on a Sunday, and that turned out to be the Tino Martinez walk-off homer to the bunny-hopping fan in right field. I still regret missing that one. Back then I had little money but a lot of time, and spent both on the M's.

Last night, it was reminiscent of all that. M's went up 1-0 in the 3rd, Angels tied it in the 5th, M's went up by two in the bottom of the 5th. Then in the 8th, the usually reiiable Paul Sewald couldn't find the strike zone and walked the first two batters, then Jared Walsh went deep to put the Angels on top and take the air out of the stadium.

Momentarily. The fans got their second wind.

It was all bottom of the 8th. We started off with the bottom of the order and got a HBP and a BB. Then for some reason we sacrificed. Sure, scoring position, but c'mon. You give up one of your three outs. So the Angels intentionally walked J.P. Crawford then forced Kelenic at home on the next play. (And it was close.) Two outs, bases still juiced, and the batter was Mitch Haniger, who had driven in all the M's runs at that point: one-run single in the 3rd, two-run HR in the 5th. And he worked the count and worked the count. And at 3-2 he lined a base hit through the left side, plating two, including J.P., the IBB, who slid into home and popped up and exalted like Lo Cain in 2015. Then Kyle Seagar followed with an RBI single to center, a dunker that fell in. We had a slight scare in the 9th when David Fletcher doubled with two outs, but a lineout to second ended the game: M's 6, Whatstheirfaces 4. It was our 90th victory on the season, the most the M's have had since 2003.

I didn't see any of this live, btw. No cable, so the M's and MLB give me no way to watch my local team. I listened on the radio. (I still have one of those.) And when things got exciting, I was texting friends. That's how I'm doing it these days. It's a system. Until the main system corrects itself. If it corrects itself.

Meanwhile, the Yankees got crushed by the Rays, while everyone else won. It's the last day of the season and the AL Wild Card is wild: