Before the Show at the Neptune 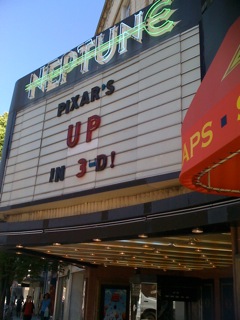 Operated: By the Landmark chain since 1981. Remodeled in 1994. The Landmark Web site still touts this, talking up the “ultra-comfy seats with cupholders” when, after 15 years, the seats ain’t all that comfy, while bragging about cupholders is like bragging about Dolby Digital. Which they also do.

I used to think: Landmark, which operates several of the better art-house theaters in Seattle, was local, but realized my error sometimes in the late 1990s. It’s based in L.A., and was owned by Texas-based Silver Cinemas International until, after filing for bankruptcy in 2001, the company sold the chain to Texas-based businessman, and Yahoo founder, Mark Cuban in 2003. According to its Web site, Landmark is “a vertically integrated group of media properties co-owned by Todd Wagner and Mark Cuban that also includes theatrical and home entertainment distribution company Magnolia Pictures...” Question: On a site supposedly for moviegoers, why use the compound adjective vertically integrated? Total turnoff. On the plus side, Magnolia Pictures has distributed some of the better foreign films and documentaries in recent years, including “Man on Wire,” “Enron: The Smartest Guys in the Room,” “Let the Right One In” and “Surfwise,” while Wagner/Cuban’s production company, 2929 Productions, helped make “Good Night, and Good Luck.”

Fond memories: When I first moved to Seattle in 1991 I lived two blocks away from the Neptune. Consequently I saw one of my first Seattle movies there (Todd Haynes’ “Poison”), along with probably the best double-feature I’ve ever seen (“Raging Bull” and “Goodfellas”). It’s where I realized that the Hong Kong craze had followed me from Taiwan (a packed house for Jackie Chan’s “Supercop” in 1993), and where I went with friends for the premiere of “Pulp Fiction” in October 1994. The line stretched around the block and we had to sit in the balcony. Fun. 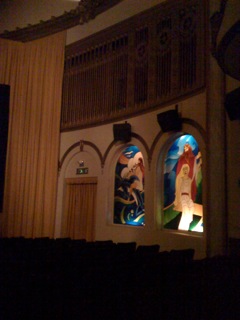 Quirky details: The theater has a water theme, as befits its name, including stained-glass windows of a pagan nature. There's also a pitcher of water and dixie cups in the lobby for patrons. On the other hand: the concession stand is two steps from the box office, which creates a bit of a bottleneck as you’re trying to get in. But then it wouldn’t be Seattle if they didn’t sacrifice waiting needlessly for quirkiness.
Featured in: Cameron Crowe’s “Singles” (1992). Passing shot of the marquee during a montage of the city.

Seated: 4:23, seven minutes before scheduled showtime. No ads, just jazz playing. A rather loud boy keeps running away from his dad (or guardian) to the front row, which is way too close to the screen. I worry he’ll be a distraction during the movie but then think, “Well, it’s his movie more than mine.” Once the previews start I don’t hear a peep out of him.