Batman: Year One, Day Two: Thoughts on the Murders in Aurora, Col.

I first heard about it yesterday morning from Amy K., who wrote on Facebook, “Waking up in America this morning did not feel good. Again.” For a second I wondered what she was talking about. Then I saw her previous status update: Colorado Shooting Suspect Identified. Oh, crap, I thought, not this again. Not Colorado again. Earlier this year, at my day job, we’d done an oral history of the legal ramifications of the Columbine shooting in Littleton, Col., 13 years ago This shooting took place in Aurora, Col. A half-hour away.

But it wasn’t until I went to the New York Times site and saw where in Aurora the shooting took place that I began to feel sick to my stomach.

I should've felt sick immediately, I know. But we have shootings all the time now, and deaths occur daily, hourly. How many occurred just as I was writing that sentence? I didn't know the people who died in Aurora, although I knew I would get to know them, through the usual media filter, in the coming days and weeks and months.

But I knew Batman.

He is a superhero and should be for children and often is. Throughout the day I kept thinking of that meme that made the rounds earlier this year: “Be yourself,” it says, in that great lesson of simplistic Hollywood storytelling; “unless you can be Batman,” it adds, which is the truer, fantasy lesson of Hollywood storytelling. We go to the movies, in the numbers we go to the movies, to watch someone better and cooler than us: 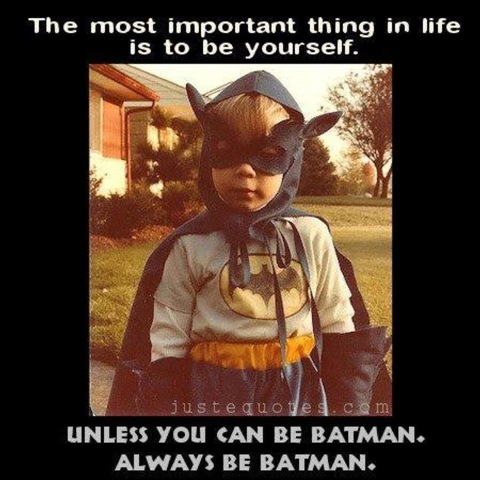 There's a great, laughable innocence to that picture, because the kid is so obviously not Batman. I have similar photos of me and my brother, more poorly outfitted, on the sidewalk out front of my parents' home in south Minneapolis in the late 1960s. I think we were still riding the Adam West/Batman TV series wave. I think Chris had a mask of some kind, I had a cape. He was on a tricycle, I was in a toy fire engine that I probably imagined to be the Batmobile. What kid doesn't want that? What kid doesn't want to climb up the walls of buildings? What kid doesn't want to be taller and stronger than all of those damned adults around him, who are currently taller and stronger than he is?

What kid doesn't want to be Batman?

Did James Holmes, besides killing 12 and wounding 70, kill this? Did he taint moviegoing? As my day developed, I found myself immersed in, and surrounded by, the fog of developments coming out of Aurora, and the sharp opinions coming off of the Internet, and at one point I wanted to just get away from it all, and thought, “OK, I'll just go see a ... Oh, right.” At one point I was at the drug store buying some medicine for Patricia, who's sick with a bad cold, and I saw this on the magazine rack: 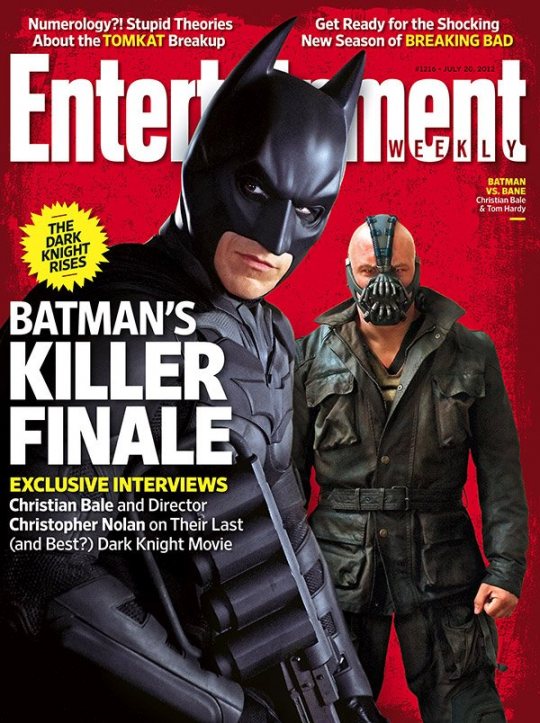 We got the usual details on the shooter. A loner. A little off. Seemed nice. He was from San Diego, a grad student in neuroscience, but he was failing and probably dropping out. At the movie theater, he'd been wearing black body armor and a gas mask, like the supervillain Bane in the movie, but he'd dyed his hair red “like the Joker,” we were told, when any Batman fan would tell you that the Joker's hair is green. There were rumors he told the cops that he was the Joker. When he was led into the police station in handcuffs, did he imagine himself to be like Heath Ledger's character in “The Dark Knight,” who, halfway through, is led into the police station in handcuffs even though he really holds the upper hand? That this temporary incarceration is all part of his master plan? At what point did the other shoe drop for James Holmes? Do other shoes drop for him?

Roger Ebert, in his New York Times Op-Ed, wrote the following about the murders:

That James Holmes is insane, few may doubt. Our gun laws are also insane, but many refuse to make the connection.

In the morning, while driving to Trader Joe's in a thunderstorm to get juice and soup for Patricia, I'd heard Pres. Obama deliver his eulogy. I liked these lines in particular:

I’m sure that many of you who are parents here had the same reaction that I did when I heard this news. My daughters go to the movies. What if Malia and Sasha had been at the theater, as so many of our kids do every day? Michelle and I will be fortunate enough to hug our girls a little tighter tonight, and I’m sure you will do the same with your children.

I thought he should've ended there. But he kept going. He said this:

So, again, I am so grateful that all of you are here. I am so moved by your support. But there are going to be other days for politics. This, I think, is a day for prayer and reflection.

Everyone lined up as they usually line up. Me included.

Folks on the left, to whom the First Amendment is sacrosanct, blamed our lax gun laws. They brought up the qualifier, the first words in the Second Amendment, “A well regulated Militia, being necessary to the security of a free State...” and wondered how we'd all become so insane. Holmes, it turns out, bought more than 6,000 rounds of ammunition over the Internet. Six thousand. Over the Internet. How is that possible? We got the usual firearm-related deaths in western countries per annum: double digits for Australia, Canada, etc., with the U.S. near or over 10,000. Everything is on the table in the U.S., usually at the latest gun show; and if not here then on the Internet. The NRA, which for most of its history was a gun safety organization, now traffics in gun danger. It makes the U.S. safer for guns, not people. One of its own, not cognizant of the events in Aurora, even tweeted this yesterday morning:

It was quickly taken down. By the end of the day, “@NRA_Rifleman” ceased to exist. Happy Friday.

Folks on the right, to whom the Second Amendment is sacrosanct, and to whom those first words about well-regulated militia, etc., are just an unwanted appetizer before the meat entree of “...shall not be infringed,” seemed silent most of the morning but then began blaming their usual suspects: Hollywood, Pres. Obama, our lack of Judeo-Christian values, the First Amendment. Salman Rushdie, of all people, sparred with these people all day on Twitter. One wrote back: “Dear #Iran: Still want @SalmanRushdie? Let’s talk.” So the NRA and its supporters are now palling around with terrorists. The enemy of my enemy is my enemy.

But as the day went on smart voices kept emerging. It's amazing what a politician—in this case, Eliot Spitzer on Slate—can say when he's not worried about ever getting elected again:

So let's act, not just wring our hands. It is time to ban all military-style semi-automatic assault weapons, ban assault clips holding more than 10 rounds, and require that new guns have micro-stamping technology so bullets left at crime scenes can be traced. These are simple, moderate steps.

Meanwhile, Salon.com's movie critic, Andrew O'Hehir, under a headline that made me cringe (“Does Batman Have Blood on His Hands?”), writes:

Most efforts to associate killing sprees with some fictional source... are transparently ideological and lack solid evidence. Nonetheless, anytime defenders of free expression respond to such charges by arguing, in essence, that art and culture have no discernible psychological effects, my B.S. meter starts clanging. If that were true, we wouldn’t argue about them so much. We wouldn’t even be interested.

Everything affects everything. I've written about this before, more than six years ago, about my brother and Evel Knievel, and me and “Breaking Away,” and little kids and Dash from “The Incredibles.” What we create, matters. If Batman hadn't existed, James Holmes probably would've found a different path to destruction. But we don't know. We know he identified with villains rather than heroes. Not much Hollywood can do about that ... except, of course, create less absolutist, more nuanced stories of its heroes and villains. But of course it does. We just don't go see them in the numbers we go see “The Dark Knight Rises.” They give us Batman and Spider-Man and Iron Man because that's what we want. Because that's what makes money.

Part of our outrage at the Aurora shootings, as my colleague Mary Elizabeth Williams has suggested, stems from the fact that the shooter has poisoned the collective joy of the moviegoing experience, one of the last widespread group activities in our segmented society. And another part of our dismay comes from the realization that Holmes’ evil acts resemble a performance meant for mass consumption, a petty and despicable analogue to the movie itself, but nonetheless successful. It would be more decent, perhaps, to mourn the dead and ignore the killer, but we’re not made that way. James Holmes has become the latest villain in a long-running violent movie for which we are all responsible and from which we can’t turn away.

Is there irony in the fact that Batman, the fictional character, was borne of a senseless murder, his parents’, who were gunned down before his eyes when he was a child? And is there further irony in the fact that we asssume the murders in Aurora won't create any new heroes, a la Batman, but may create copycat villains, who also want their 15 minutes of infamy?

The superhero story is just that, a story, for children, but we've made it central to our culture. We feel the need to watch it over and over and over again, as if to reassure ourselves that that which isn't, is. Did James Holmes break that fever? Was he the nightmare who entered our long national daydream and woke us up? But to what? And for what?

I will go see “The Dark Knight Rises” today, as I'd intended. I won't go in the spirit I normally would. I'll go in the spirit of Daniel Isaacson at the end of E.L. Doctorow's novel, “The Book of Daniel.” I'll go to see what's going down.