Fun fact: Every one of the 10 teams that made the MLB playoffs last year has made the playoffs again this year with the exception of the team that won it all, the World Champion Washington Nationals, who finished with the third-worst record in the National League: 26-34. Karma for this, maybe? 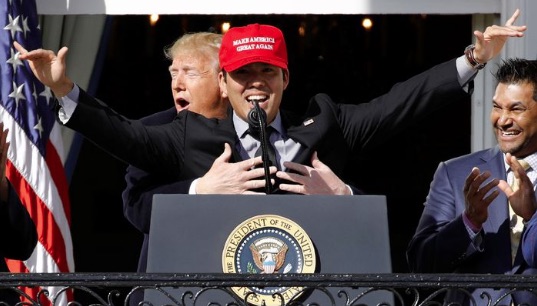 I swear, everything that man touches turns to shit.

Another fun fact from this odd Covid season: 16 teams made the playoffs, and the playoff lineup includes not only nine of the 10 from last year but also some of the teams with the longest playoff droughts. A year ago, Sept. 29, 2019, I wrote the following:

After the M's, the longest MLB postseason droughts are the usual suspects: Marlins (2003), Padres (2006), and the White Sox (2008). Every other MLB team has gone to the postseason this decade. Every one. Think of that.

And guess what? Every one of those teams made the playoffs (yay!) except for the Mariners (of course). I don't know if it's a sign of how long we've been down, or excitement that we now have a fun young team, but I almost take consolation in the fact that we finished with the best record of any AL team that didn't make the playoffs. That said, there's now a huge gap between the M's and the next worst team on the playoff-drought list:

What would this year's postseason look like under last year's rules? In the NL, Braves, Cubs and Dodgers win their divisions, while the one-game wild-card battle is between the Padres and ... a three-way tie for the second wild-card team (Marlins, Cards and Reds). The only team definitely out is the Brewers. In the AL, the picture would be clearer: Rays, Twins and A's win their divisions, while the White Sox and Indians battle for wild card. Gone are the Astros, Blue Jays and ... Yankees. Ooh, so close.

Playoffs start tomorrow. Cable-less, I'll have to try to find a way to watch.