Another Death of Superman

This was my favorite response to the news yesterday that DC and Warner Bros. were going in a different direction with their “extended universe” and Henry Cavill was out as Superman.

WB got rid of Henry Cavill? I'm fucking done with those imbeciles.

If you'd asked me what was wrong with DC's universe, I would‘ve most emphatically begun with director Zack Snyder, who made the problematic “Man of Steel,” then the disastrous “Batman v. Superman,” and gone on from there. Most of the bad follows from the decision to hire him. Snyder’s not just form over content, he's vainglorious form over idiot content. The whole “Martha” thing will be a joke for decades to come—for as long as superhero movies are made. Introducing half of the Justice League in “Justice League,” before they had a movie of their own, or at least been in someone else's movie, wasn't smart, either. Hey, here's three origin stories along with the continuing story of the death of Superman in one movie. Have at.

But at the bottom of the list? I.e., What‘s right with the DC universe? Gal Gadot as Wonder Woman and Henry Cavill as Superman.

Many men have played the Man of Steel but only one has played him better—and even then it’s pretty close. Cavill was perfect in looks, form, content. There was a gentleness and quiet to his spirit as Superman, as if he knows he might break the world otherwise. But Snyder gave him an idiot world to act in. He didn't give him a reason for being. After the search for himself, for his origins, he had no motivation other than hanging with Lois and rescuing Lois and confronting Batman. His Clark Kent, reporter, was never grounded in anything—let alone J school. He seemed like Superman playing dress up—or dress down. They never addressed this: Why be Clark when the world was in such trouble? Their answer made it seem like he didn't want to be Superman. Helping people? What a drag. He seemed lost and no writer or director reached out to lend a hand.

The tweeter above also gave us this: “Besides being distressingly handsome, Cavill perfectly blended humanity and an ethereal otherworldliness that makes Supes Supes.” I love that “distressingly handsome” bit. So true. Every so often I'd call Patricia over to view some photo of Cavill and say, “My god, look at this.” For some reason, Patricia was less impressed—until she saw the photo montage with his dog, Kal; then she became a fan. 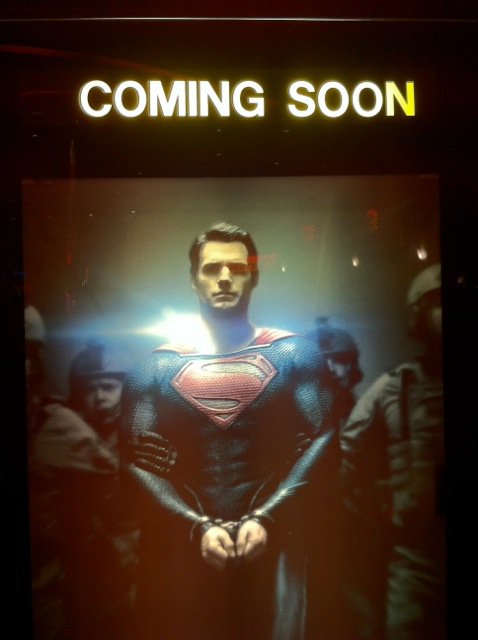 Superman: illegal alien. Unwelcome. Incarcerated. It had even greater meaning than we knew. Then it all got lost in Zack Snyder's noise.

My boy. Look what they did to my boy.