And Then There Were Seven: Houston Astros Win First World Championship

Was Game 7 the dullest of the seven? My friend Jim began complaining in the second inning when the Astros went up 5-0 on the back of George Springer's lead-off double and two-run homer. He thought it was over then. I didn't. Five runs? What's five runs in Major League baseball? And in this series? Pfft. Plus the Dodgers kept threatening. Three on in the first. Two on in the second. Two on in the third. Two on in the fifth. But: nothing, nada, bupkis, meiyo. 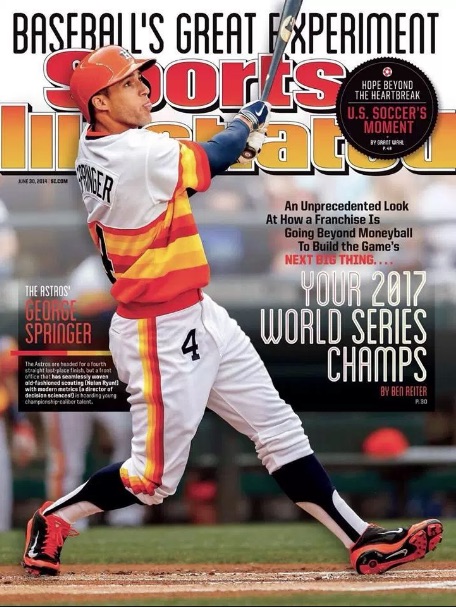 Then in the sixth, with two on and one out, Andre Ethier, the forgotten Dodger, grounded a single to the right side to plate Joc Pederson and put the Dodgers on the board. Except instead of the beginning, that was the end—the Dodgers last hit of the game, the series, the season. Astros pitcher Charlie Morton got Chris Taylor swinging and Corey Seager on a grounder to short to end the threat. He retired the last 11 men he faced and got the W.

Ethier's hit was, in fact, the last hit for either team. Jose Altuve, who drew a two-out walk in the seventh and then stole second, was the season's last baserunner. For the rest of the game, it was three up, three down. Old-fashioned baseball. This bangiest of World Series ended with a whimper.

And after 55 years, the Houston Astros were World Champions.

Thank god, I say. They began this post-season as my third-favorite team but moved up fast. I mean, I had the Nats ahead of them, mostly because the Expos/Nats franchise has never even seen a World Series, while the Astros had at least been in 2005, but c'mon, it's much easier to root for Jose Altuve than Bryce Harper. Plus the Astros knocked out the Yankees. That's extra props. It also makes Sports Illustrated's June 2014 cover look like the most prescient of sports predictions. They even nailed the Series MVP.

It wasn't easy. In that last game they made it look easy, but it wasn't. The wounded were everywhere. If you'd told Astros fans at the beginning of the series that neither Dallas Keuchel or Justin Verlander would win a game, and their closer, Ken Giles, would wind up with a 27.00 ERA and lose his closer role, they would've envisioned disaster. Instead, this.

So now that Houston, which began things in the National League in 1962 as the Colt .45s, has its first ring, which teams remain ringless? Seven. Count 'em off:

The victory parade for this most likeable of Astros teams is tomorrow. Three-day weekend, Houston. Enjoy.