I agree with you about Derek Jeter. He was such a fine example of man, ballplayer and Yankee, that I can’t imagine anyone else being named Captain of the New York Yankees—the title Mr. Jeter has held for the last 11 years. And for that reason, you’re right, Derek Jeter should be the 16th and last Captain in New York Yankees history. You shall have no other captains after he.

But I don’t think you go far enough.

Just look at Jeter’s legacy: four World Series championships in his first five years in the Majors. Think of that! True, without O’Neill, Tino, and Coney, the Yankees and Jeter, who officially became Captain in 2003, managed only one more title over the next 14 years. But he was obviously the impetus for the first four. Well, him and Jeffrey Maier.

More, look at the record books! Seventh all-time in at-bats! Sixth all-time in hits! Fifth all-time in singles! He’s also 30th in doubles and 189th in homeruns! Tied for 112th in batting average, 190th in OBP and 514th in slugging! Can you imagine? Only 513 players in Major League history slugged better than Derek Jeter. We shall never see his like again.

And that’s why I don’t think you go far enough. You don’t truly honor what Derek Jeter has meant to the Yankees and the city of New York.

Do you think any of these guys are fit to wear the same uniform as Derek Jeter? Mr. November? Captain Clutch? Captain Crunch?

And can you imagine anyone in the future having the same kind of guts, glory, flair for the dramatic, and numerous bloops singles that Derek Jeter had?

I understand this might leave Major League Baseball in a bit of a quandry, with only 29 teams rather than 30, meaning not every team could play every day.

But “Is this decision right for Major League Baseball?” is the wrong question to ask. It’s not even a matter of “Is this right for the New York Yankees?” No, the only proper question to ask is, “Is this the right decision for Derek Jeter?”

I think you know the answer to that one. And I think Mr. Jeter would agree with you. 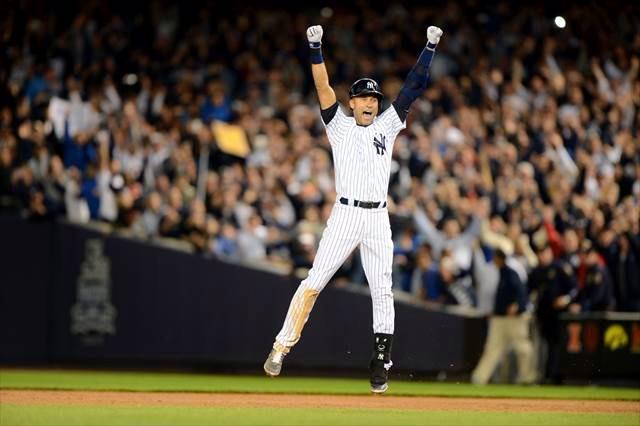 Smells like team spirit: Derek Jeter celebrates the walk-off single in his last home game that put the Yankees only 12 games back of the first-place Baltimore Orioles.