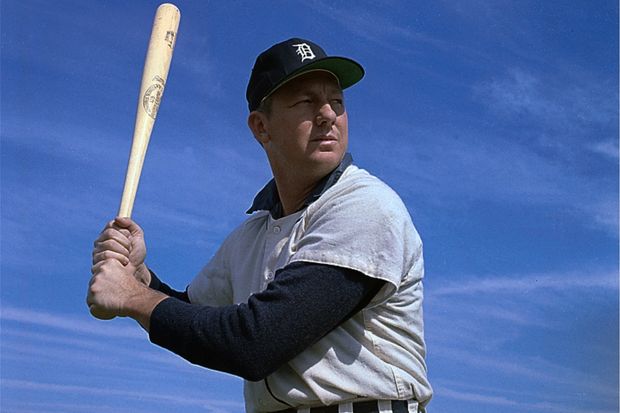 Gordon was one of the title characters in Roger Angell's great article “Three for the Tigers,” which was published in The New Yorker in September 1973, as well as one of the talking heads kvelling Hank Greenberg in Aviva Kempner's great documentary “The Life and Times of Hank Greenberg.” I think of Gordon because early in the article, Angell describes Gordon going into his office in Oak Park, Michigan, on a Monday morning, taking off his shoes and sliding his feet “into a pair of faded blue espadrilles,” and then punching in numbers into a desk-model calculator, which, in my mind, is huge, heavy and metal, and which sits on a side table. He's calculating two things: as a Democrat, what percentage of Nixon's term in office remains (he doesn't know it yet, but he's going to catch a break there); and as a Tigers fan, what Al Kaline's lifetime batting average is. Over the weekend, Kaline went 1 for 7 against Minnesota, so on this Monday morning his lifetime average reads: .3000267. Angell writes: “Bert sighs, erases the figure, and picks up his telephone. He is ready to start his day.”

You should read the piece if you haven‘t. It’s available in the book “Five Seasons,” Angell's second compilation, where Angell includes an afterword. Gordon's first calculating ritual ended in August 1974 when Nixon resigned amid the disgrace of Watergate, the second when Al Kaline retired in October 1974. Before the Tigers last homegame, Oct. 2, Gordon realized late that he was missing his last chance to see Kaline in action, so he hopped in his car, caught Kaline's first at-bat (as DH) over the radio, and was heading into the stadium when he heard the roar accompanying Kaline's second. At least he'd catch the rest. Except that was it. In the bottom of the 5th, Ben Oglive pinch-hit for him. “The next morning,” Angell writes, “in his office, he punched out the final Kaline numbers: 10,116 at-bats, 3,007 hits, for a lifetime batting average of .297518.”

Kaline's last years were a battle between the counting numbers and the statistical ones. Yes, his lifetime batting average slipped below .300 at some point in 1973 (Bert could've told us exactly when), but on Sept. 24, 1974, he became just the 12th man in baseball history, and the first since Roberto Clemente, to reach 3,000 hits, with a double off Dave McNally at Memorial Stadium. It was his last extra-base hit. He fell just short of similar milestones in doubles (498) and homers (399).

When I think of Al Kaline, I also think of Harmon Killebrew. When I was a kid and began paying attention to baseball in 1969-1970, they were the eminence grises of two Midwest American League clubs: both white, quiet, somewhat bland, with “K” initials. They were also both very nice men. As a Twins fan, I assumed Killebrew was the better player. He was 1969 MVP, after all, and hit 500+ homers. But Kaline was by far the better fielder, winning 10 Gold Gloves, and bWar gives it to Kaline by a longshot: 92.8 (29th all-time among position players) vs. 60.4 for Killer. The Hall of Fame agreed. They kept making Killebrew knock before letting him in; Kaline got in his first time with 88% of the vote. He was the first Tiger to have his number retired, too, in 1980.

He died yesterday in his home in Bloomfield Hills, Mich. “No specific cause was given,” The New York Times reported.