A Weekend Catching Up on Old Magazines

First Vanity Fair, the one with Chris Pratt on the cover. I read a bit of that profile but only after I read two articles on Donald Trump. That's where the mind goes these days. 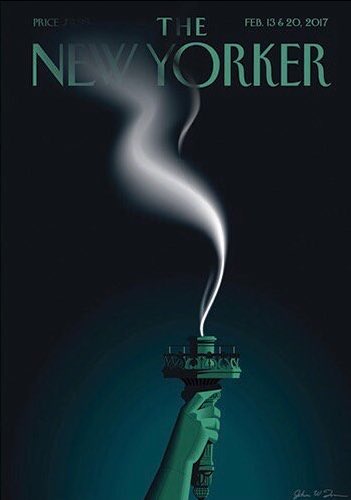 The first, by Nick Bilton, is about the search for salacious Apprentice material in the months leading up to the 2016 presidential election. Disclosure: They don't find it. Bilton wonders if it would've mattered if they had. They already had him on tape in 2005 bragging about trying to bang a married woman: “I did try to fuck her,” he says. “I moved on her like a bitch,” he says. And then, most infamously, “When you're a star they let you do it. You can do anything ... Grab them by the pussy. You can do anything.” The whole piece was interesting, but sad, of course, and two lines stood out. This one for obvious reasons:

Two days before the election, one entertainment executive with ties to Clinton contacted someone in the industry who had said he had a copy of a tape depicting Trump that could create problems for the then candidate. Would this person be willing to pass him the footage to give to the Clinton campaign? Since the latest poll numbers indicated it was clear Clinton would win the election—likely in a landslide—this person didn't want to risk it.

But this one even more:

(People who had worked with Trump on The Apprentice had heard that he would be in the 2016 race for two months at the most, then he'd be back on reality TV.)

The mess we're in: It wasn't supposed to be.

Michael Lewis has a piece in the same mag on creating his own Trump board game. The germ of that idea began the day after the election when he was volunteering at his kid's high school in L.A., and the kids staged a peaceful walkout to protest Trump's victory. Then the phone began to ring. Right-wing sites had written about the protest and Lewis was hearing sound and fury from Trump supporters who expected the world to fall in line now that their candidate had won the election—by having 3 million fewer votes. Offhandedly, Lewis wondered how Trump would keep up their vitriol once Hillary left the stage. (I think the answer is Don't let her leave the stage. Or: Find other scapegoats: the media, the courts. There's always something.) I forget the other type of mental game Lewis came up with before deciding on his new, imaginary board game—I lost interest, rare for a Lewis piece—but one line stood out for me. It was about kids he met when he went to talk in a high school in Oakland. He wrote:

The election had taught these kids that a large part of their country no longer holds political candidates to the standards of behavior enforced by their own high school.

Much recommended is the Feb. 13 & 20 issue of The New Yorker, the one with the Statue of Liberty's flame being snuffed out, where there's a great, long piece by Patrick Radden Keefe on chef, author and globetrotter Anthony Bourdain, and it includes his meeting with Pres. Obama in Hanoi last year for bun cha. After the encounter, after Pres. Obama had left, Bourdain said the following about Obama to Keefe:

I believe what's important to him is this notion that otherness is not bad, that Americans should aspire to walk in other people's shoes.

Agreed. And also sad. Given everything.

I particularly loved this later observation by Philippe Lajaunie, one of the owners of Les Halles, where Bourdain had been excecutive chef in the 1990s, about Bourdain. No politics in this one, just universal truths:

He has accepted that everyone has broken springs here and there. That's what most of us lack—the acceptance that others are as broken as we are.

Finally, definitely read James Surowiecki's financial page column, this one entitled “Trump's Budget Bluff,” in which Surowiecki crunches the numbers of Trump's budget proposals and promises (cut taxes, cut waste, get rid of PBS and the NEA, balance the budget) and what'll happen if he gets his way (we'll go into deeper debt). Why don't his supporters know this? Because they assume things like the NEA and aid to foreign countries make up a greater portion of the federal budget than they do. Surowiecki quotes from sociologist Arlie Hochschild, who has written a book on working-class Republicans in Louisiana:

Many of the people she talked to believe that the federal government employs forty per cent of American workers; it's closer to two per cent. “They think that the government is full of waste and freeloaders,” Hochschild told me. “And they believe that most government money is going to programs—welfare, foreign aid, the arts, even environmental protection—that aren't for them but for the people they feel superseded by.”

They think this because right-wing media lies to them (in HEADLINES!) and mainstream media corrects it (in the 12th graf). If they even correct it. If it's even seen.