Am I the only one who cares about the grand slam record? It seems so. Alex Rodriguez broke the mark, set by Lou Gehrig way back when, when he hit his 24th Friday night, and there's nary a buzz. Maybe if a better man had broken the mark, one not so universally reviled or tainted, it would've garnered more attention. As is, a blip.

But I think it's more than that. Here's how unimportant the mark is:

They'll also give you some of the newer stats: WAR (their version), RE24, WPA, REW.

Growing up, the grand slam mark meant something to me. Maybe because Lou Gehrig meant something to me, seeing as I was an overly sensitive kid and seeing as his was baseball's most melodramatic story. Or maybe it was because Gehrig was hanging out there all by himself with 23. The nearest guys? Jimmie Foxx and Ted Williams with 17. Willie McCovey would eventually hit 18 but not until 1977 or so. There was Gehrig and then everyone else.

Obviously, to do this, you need to be on run-scoring teams for a long time and during a high-production era, and Gehrig was and was, and A-Rod was and was. So now the mark is his. 24. Junior's number.

It was even important. It put the Yankees ahead. They were tied with the Giants, 1-1 in the bottom of the 7th, and A-Rod jacked it with two outs. A single, a HBP and a walk and then gone. And then magic. You could almost call it heroic.

What's sad about all of this for people in Seattle? Three of the guys that scored in that historic grand slam for the Yankees were former Mariners: A-Rod, Ichiro, Brendan Ryan. More power to them. It's nice to know that somewhere, something historic is happening. 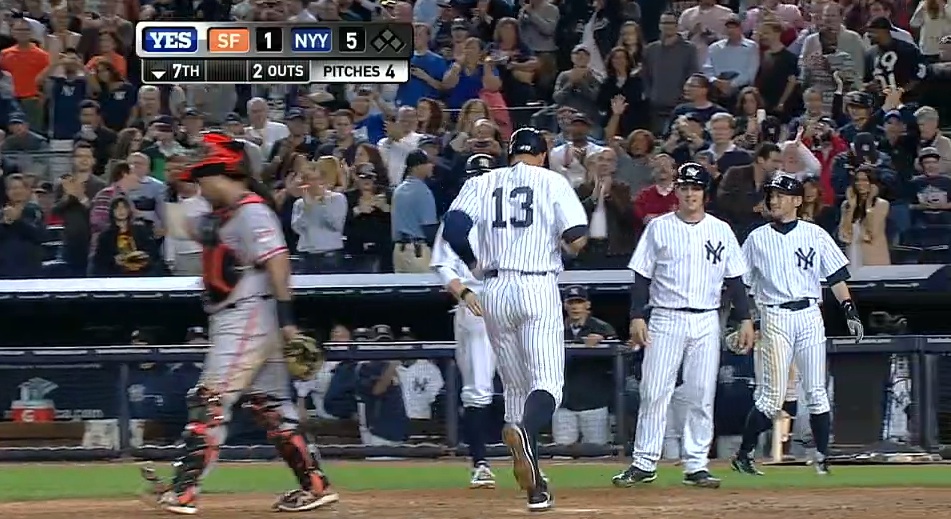