“Waiting for Lee, Maybe Until the Winter”—Special YANKEES SUCK Report

Waiting for Lee, Maybe Until the Winter—Special YANKEES SUCK Report

Cliff Lee had a free night in New York on Monday, and he spent it having dinner with C. C. Sabathia. They are former teammates, and probably future teammates, too. !@#$%^&*!!!! (Trying to swear less; nephew reads this blog sometimes.)

“We didn’t really talk about what’s coming up or anything like that,” Sabathia said before Lee stifled the Yankees, 7-4, on Tuesday. “He’s just trying to focus on his season. But I would love to see him over here.” So I can eat him.

For the moment, Lee still pitches for the Seattle Mariners, who arrived at Yankee Stadium 15 games behind the first-place Texas Rangers in the American League West....and promptly beat the first-place Yankees in their first two games by a combined 14-4 score. Hopeful of contending this season, the Mariners quickly fizzled, and they have let Lee know they will shop him before the July 31 nonwaiver trading deadline. ...

Last season, Lee won the first regular-season game and the first World Series game at the new Yankee Stadium, then beat the Yankees again in Game 5 in Philadelphia. Good times. The Phillies thought he wanted to be a free agent, and traded him to Seattle in December when they acquired another ace, Roy Halladay, from Toronto. 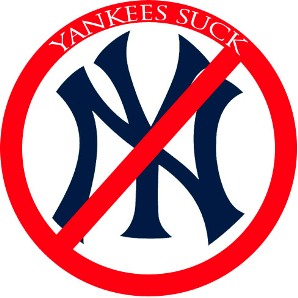 Trading for Lee was a no-lose proposition for the Mariners. They wanted to win with him, but barring a miraculous turnaround, they instead will trade him for a package of prospects that promises to be better than the one they gave the Phillies. One hopes. One never knows with the Mariners' front office.

But the Yankees’ rotation is strong, and they are much more likely to wait until the winter to sign Lee, without losing any talent... I don't know if I‘ve read a sentence with a greater sense of entitlement and privilege than this one.

There is no reason to believe Lee will forgo free agency, and when he hits the market, other teams might as well back off. Unless it’s this sentence. Wow. I hope Theo Epstein reads this. I hope every MLB GM reads this and gets their collective backs up. Every factor points to Lee’s joining the Yankees. Every factor, Tyler?

Two of their starters — Andy Pettitte and Javier Vazquez — are unsigned past this season, so the Yankees have a need. Me wants. They are always flush with cash.  Me has money. They have seen Lee dominate on the brightest stage. He purty. And Lee is friends with Sabathia and A. J. Burnett, a fellow Arkansan who shares an agent and affectionately calls him Cliffy. Friend good.

“I’d tell him he would love it here,” Sabathia said. “I know he would, just knowing his personality and the spotlight of playing in big games. That’s what he wants. This would be the perfect place for him.” Except his greatest games have involved beating the Yankees. Destroying them. People cheer for him because he's David but they would hate him if he joined Goliath. That's the question that Tyler “Every factor” Kepner doesn't ask. Why would he want to join Goliath? Is he so scared of Goliath that he needs join them? Is that he that much of a coward? Like all of those other Goliath-joining traitors?

After the game, Lee stressed that he was comfortable with the Mariners and focused solely on pitching well for them. He did acknowledge that he liked to pitch at Yankee Stadium, as Sabathia suggested....and beating them.

“You’re going to have a sellout pretty much all the time,” Lee said. “I’ve always enjoyed pitching here. They’re knowledgeable fans that understand the game and get into it. As a player, that’s what you like and respect.” They get into winning. They get into treating the rest of the league like it's their own farm system. Give the Yankees a $50 million payroll and see how much Yankees fans “get into the game.”

But where will Lee make his stopover before free agency? Contenders like the Rangers and the Los Angeles Dodgers need an ace, but many people in baseball doubt they can add payroll. Really? Half of $9 million?

The Mets would love to have Lee, but the Mariners have not yet asked for specific players. That's true of every team. Why just bring this up with the Mets? If they demand Ike Davis or Jon Niese, the Mets will probably decline. Ah. To shoot down the Mets. They would also be hesitant to deal Angel Pagan because of the uncertainty surrounding the still-recovering center fielder Carlos Beltran. And Pagan is 29 tomorrow. Hardly a prospect. The Mariners need future, not present.

The most likely landing spot could be the Minnesota Twins I‘ve been arguing this for months..., who have insurance on the contract of the injured closer Joe Nathan that gives them financial flexibility. The Twins are in a tight race in the American League Central, and because their franchise player is a catcher — Joe Mauer — they could easily part with their top catching prospect, Wilson Ramos... Months, Tyler.

General Manager Jack Zduriencik was guarded on Tuesday, saying the Mariners were concentrating only on winning right now. Soon enough, the focus will change, and Lee will be one step closer to calling Yankee Stadium home... God, you’re insufferable. God, Major League Baseball is screwed. The lack of a level playing field in this sport is ruining this sport. Rooting for the New York Yankees is like rooting for Goldman Sachs.