I was biking into the Bellevue office today for a team-building event when I was stopped on the I-90 bridge by the police. Not for speeding (wucka) but because the bridge was closed to pedestrians and bicycles. Cars were still able to cross for another 15 minutes, then they too were banned for a few hours. The Blue Angels were in town and were practicing over Lake Washington.

This happens every year so I should have anticipated it.

Alternate routes? Cars can go the 520 bridge, or drive I-5 south to Renton. On a bike, you're kind of screwed. The 520 bridge doesn't allow for bikes and going north or south around the lake takes a good long while. So I missed the event.

Why don't they let traffic across I-90 during the Angels practice runs? I guess because they don't want drivers being startled and getting into accidents and suing the city and whatnot. As for how this applies to foot and bicycle traffic, I'm not sure. Wouldn't the lack of cars, for example, be a giveaway to anyone crossing the bridge? Couldn't the same police officers that told me I couldn't cross the bridge stop me and tell me to watch out for Blue Angels? Look! Here they come! FOOOOOOOSH!

When I texted my predicament to Patricia, she texted back the feeling of a lot of Seattlites at this time of year: “Blue Angels, ugh.”

It's very Seattle being Seattle. We have some of the worst traffic in the country, yet several times a year we close down this major thoroughfare in the middle of the day. We also have drawbridges over the ship canal, and we'll raise and lower these on a dime for boats going from Lake Washington to Puget Sound and back, stopping traffic in both directions. Except during rush hour, which we quaintly designate as something like 4:30-6 PM.

First world problems, I know. In some parts of the world, when similar jets scream overhead they drop things.

I did stick around for a bit today; and while everyone else was watching the Blue Angels I took photos of the bridge without any traffic on it. All that concrete. 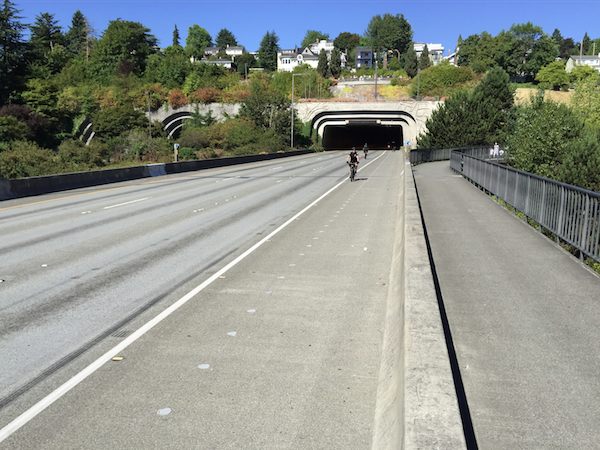 Bike cops patrol the empty I-90 bridge before letting on foot traffic. 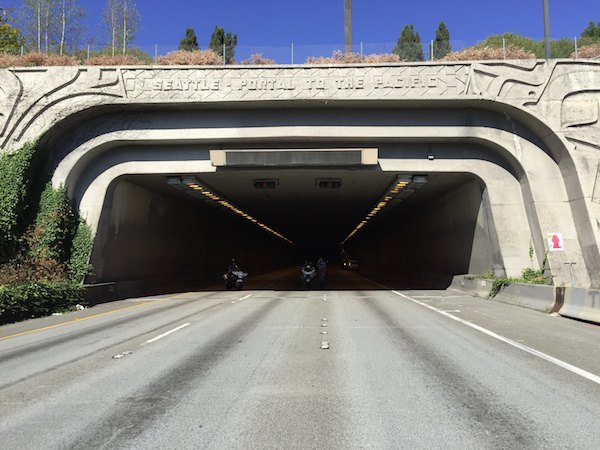 A view you don't normally get on foot. 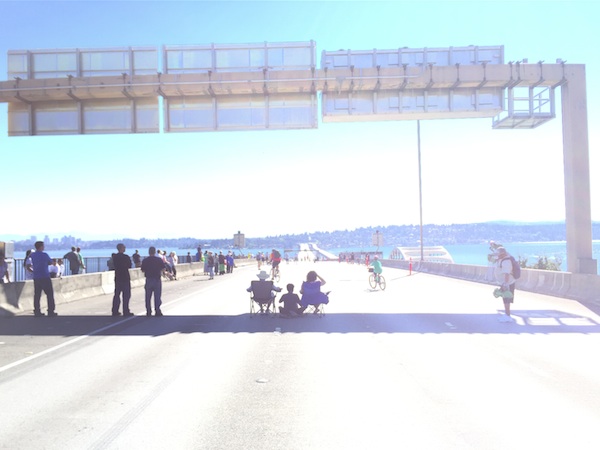 'And here you are; and it's a beautiful day.'