I left Twitter last night. I deactivated my account. I'll have to find something else to fill my fidgety soul.

I was enjoying it, how much Elon Musk was screwing over the site he paid $44 billion for, our daily reminder of what an idiot this supposed genius is; but when he put out a poll about reinstating Donald Trump, and then took the results of that poll as gospel, tweeting pompously, “Vox Populi, Vox Dei,” or the voice of the people is the voice of God, I don't know, it just wasn't funny anymore. People who chide Musk can get booted off the platform. But the man who attempted to violently overthrow American democracy? Who shattered our shaky democratic norms? Who has made it OK for racism and anti-Semitism to creep back into the town square? And is trying to do it all over again? Sure, let's welcome him back.

That's how Musk came in, as a self-professed “free-speech absolutist” and card. He thought he was forthright and he thought he was funny. This was one of his first tweets as owner of the site:

One assumes he was alluding to “political correctness” and “wokeness.” But to give you an idea of his comedy chops, he also posted a video of himself bringing a sink into Twitter headquarters so he could tweet “Let that sink in.” I think he thought he was the cool teacher coming into the classroom whom all the kids would dig; instead he was pelted with spitballs and erasers from day one. It was glorious to watch.

Every move was wrong. Twitter has long used blue checkmarks to verify famous people are who they say they are. I.e., That's really Stephen King, not someone pretending to be Stephen King. Well, Musk thought this smacked of elitism and he wanted to charge for the service: $20 a month. When the real Stephen King balked, Musk responded, “How about $8?” I have to give Musk credit here. He's not funny, but that's the funniest thing he's ever tweeted. It's inept negotation in real time from the World's Richest Man. My favorite take on the fiasco came from Michael Schur, who said that Musk already had a platform in which the Taylor Swifts and Stephen Kings of the world gave him content for free ... and now he thought he could charge them for giving him content for free.

And tens of thousands pretended to be Elon Musk. 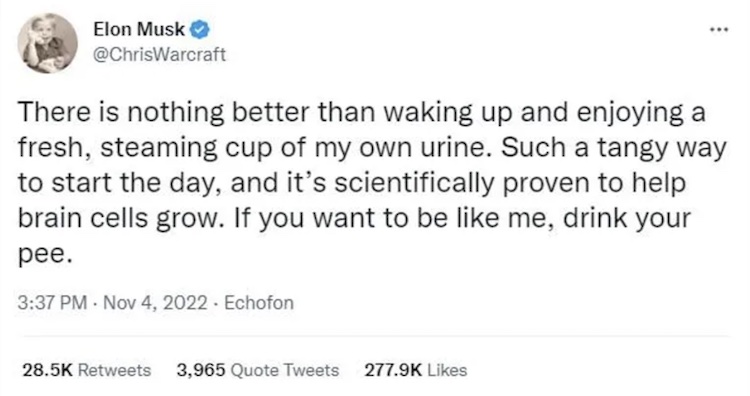 And what did this self-professed free-speech abolutist do with all this? He reversed course without saying he was reversing course. He said anybody pretending to be anybody would be permanently kicked off his site. He also fired top executives, particularly those who had objected to him taking over the company, fired half the staff, then sent out SOSes for some of them to return since the company could no longer perform certain necessary functions. Meanwhile, according to James Surowiecki (“Why Elon Musk Is Blowing Up Twitter's Business”), he sought to assure big-name advertisers that his platform was a good, safe space in which to advertise.

There was also the less-funny stuff: tweeting conspiracy theories about the attack on Paul Pelosi, the husband of the Speaker of the House; urging people to vote Republican to “balance things out”; blaming advertisers leaving Twitter on left-wing activist groups rather than his own ineptitude.

Then Trump. And that's where I draw the line. This was my last tweet. 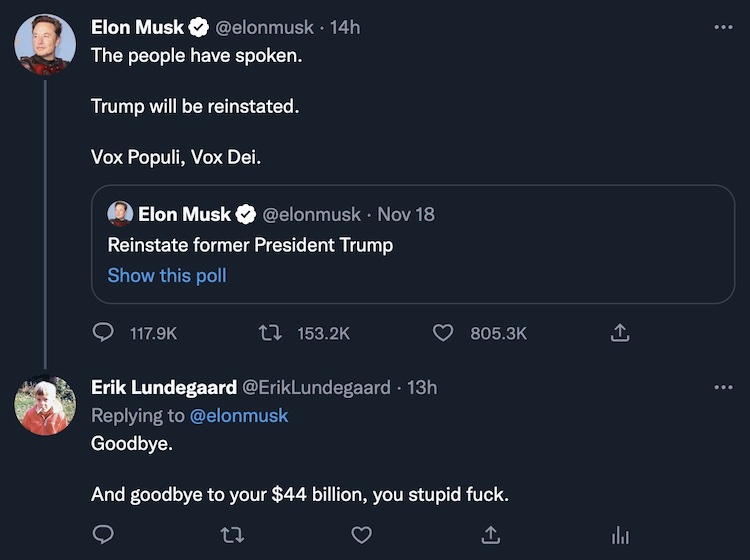 OK, so not exactly Fran Lebowitz.

I know I'll miss it. I'll miss the real-timeness of it. I'll miss the top-notch lawyers that I followed whose legal opinions were way more straightforward and helpful than the slow, cautious, often confusing reports from the likes of the Times and Post. I'll miss thinking “I should share this” and then immediately sharing it—usually into a void. I'll miss the baseball cards and baseball talk.