That would be me, by the way.

I usually do day hikes, usually on Saturdays, usually with my friend Jim, who's been hiking these parts since he moved here from New Jersey in 1981. Jim's got a new girlfriend, though, who lives about an hour outside of Seattle, and they tend to spend weekends together. My girl, meanwhile, Patricia, was sore from volunteer work she did Friday. So Saturday morning I headed up the I-90 corridor by myself toward Granite Mountain.

Since Jim got me into hiking I've tended to follow his lead, and Jim's into the following: a 6-mile round-trip hike, with a 2,000-foot elevation gain, that begins in the forest, breaks through to meadows, and winds up on a mountaintop with great views. You eat lunch, you head back. Jim doesn't approve of hikes that end in lakes. Jim doesn't approve of hikes too close to Seattle, or to I-90, or to other people. He likes to get away.

This means that, though I've been hiking for 10 years, I haven't done some of the most accessible hikes in the area: Snoqualmie Pass hikes less than an hour from Seattle. That's Granite Mountain. Take exit 47, turn north for .2 miles, turn west for .4 miles, and, boom, you're at the trailhead. Beats 16 miles over a bumpy dirt road. Other cars can do that but we've got a '95 Honda Civic, low to the ground, and those dirt roads take their toll even if the U.S. Forest Service doesn't.

Saturday morning was beautiful—blue skies, warming Pacific Northwest air. I left before 8:00 and was on the trail before 9:00. To be honest, there are certain things I don't mind doing alone and hiking's one of them.

Here's the second reason, and it relates to the first: I'm a daydreamer. “You live the life of the mind,” a friend recently said. Which means I'm hiking along, thinking about this profile I have to write on a lawyer, and that piece I have to do for MSNBC-Movies, and what would be the next best step in that profile, and should I include this scene or that scene in the MSNBC piece, and, wait, what's that on my face? A cobweb? Puh! And another one? Damn, there's a lot of cobwebs on this trail. Or are they silkworm threads? Because I don't see any... Oh, there they are. Shit, that's a big spider. Yuck. Remember Tarantula? Remember The Fly? “Help me! Help me!” I joked about it last weekend so of course now would be the time... The ironic school of storytelling. The O Henry ending. Of course there are no giant spiders, Erik. Ah, but there are cougars. There've been a lot of sightings lately—even in Seattle. Who's to say? What are you supposed to do if you cross paths with a cougar again? Run? Pray? Punch it in the nose? Jesus, I should've been in Boy Scouts. I should've learned something. Does Patricia even know what trail I'm on? Well, the car's at the trailhead. At least they'll know where to look. Puh! More spiderwebs. Man, where is everybody? And what time is it? 9:35? Wait... wasn't the turnoff supposed to be after like a mile? Did I miss it? Am I even on the right trail? Did those people at the trailhead distract me from seeing the real trail, and now I'm on this wrong trail that everyone else knows you don't hike at this time of year because of all the damn spiders? Because of the giant spider? Puh!

Fifteen minutes later I finally saw someone: a thirtyish dude who must've camped overnight because his sleeping bag was still on the trail. I stepped over it...and at the last instant realized that someone was actually in the sleeping bag. Boy or girl? Not sure. Just hair sticking out the top of the bag.

“Forgive me for asking a really stupid question,” I began. “But what trail is this?”

He did a mild double-take. “The Pratt Lake Trail.”

“Yeah, that's like...about a mile back. It's right near this stream, you know? You were probably distracted by the stream.”

“Thanks!” I'd crossed a few mountain streams on the way there, so on the way back I look at each one carefully, searching for the trail up. Didn't see it. Until the fourth mountain stream. Then on the far side (the near side during my first pass) I saw a narrow trail. I remembered seeing it, too, and thinking it was just another scabby trail that would dissipate after 20 feet. That it was a dead end. I thought: “You know, that Mountaineers book should really emphasize that the turnoff isn't that prominent. That it's easy to mistake for a dead-end trail.” I was thinking this as the trail dead-ended after 20 feet at the mountain stream. It wasn't the Granite Mountain turnoff, after all.

I found the Granite Mountain turnoff five minutes later—or about 20 minutes from the trailhead. It's big and open, with a wood sign reading “Granite Mt.,” and an arrow pointing up. All that's missing are the flashing lights and the carnival barker directing you.

I sighed, paused, calculated. I'd already hiked three miles and still had three to go just to reach the summit. The original hike was arduous enough—8 miles roundtrip, 3800 feet elevation gain—and I was turning it into a 10-mile hike with a, what, 4300 feet elevation gain? 4500 feet? Plus the brunt of the hike has a southern exposure and they recommended making it there early on hot sunny days. My daydreaming had cost me a crucial hour. But I figured I didn't have to summit. I could just hike until I got tired, grab a spot with a view, eat lunch, come down. Easy.

I hiked with a sense of urgency—as if I were trying to catch up with someone—and passed all the hikers that should've been behind me in the first place. When I hit the sun I stopped to put on sunscreen and a Mariners cap. When I hit shade I stopped to drink water. Soon I began to run into descending hikers. One woman, after she passed me, said to her friends: “God, can you imagine trying to go up at this time of...” Thanks, lady. On and on. Up and up. The fall colors of the blueberry bushes were beautiful, and the trail began to diverge on rocky slopes until it was hard to tell where the trail exactly was. But I kept choosing the most obvious path up. As it neared noon, I kept thinking, “This looks like a good spot for lunch,” but kept going. At one point the rocks got huge and the trail leveled off and it finally felt like I was summiting. But I remembered from the book that there was something extra to do. What was it again? Then I turned a corner and saw the extra: an old fire lookout atop Granite Mt.: 400 feet almost straight above me. I stared at it, found shade, plopped down. I thought about lunch again. Then I thought the thought that always keeps you going: I've come this far...

In the end that extra 400 feet went quickly and I stumbled rubber-legged over the giant rocks in the shadow of the lookout and chose a spot facing south: a large flat rock worn smooth by the number of hikers who had chosen it before me. After the long hot summer the Cascades to the left and right looked strangely brown and denuded, but Mt. Rainier, straight ahead, was still gloriously capped with ice and snow. Then I looked below. Way way down, cutting through the woods, lay the thin ribbon of I-90, with cars moving east and west. Could I even hear them? After all this work? How annoying. Jim was right.

Then I laid back against the warm rock and closed my eyes. Even so. 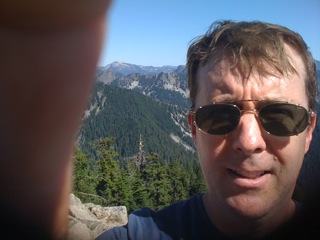 The author, unable to find the turnoff. Unable to take an iPhoto.