In “What Price Hollywood?,” an RKO picture from 1932, directed by George Cukor, Constance Bennett plays waitress Mary Evans who is plucked from obscurity by director Max Carey (Lowell Sherman), becomes a star, and gets married to a rich man, Lonny Borden (Neil Hamilton, Commissioner Gordon of TV's “Batman”). It's ur-“Star is Born” since, as she rises, Carey plunges into alcoholic stupor and death, while her marriage to Lonny can't handle her celebrity and breaks apart. Here's the telegram informing her of this. 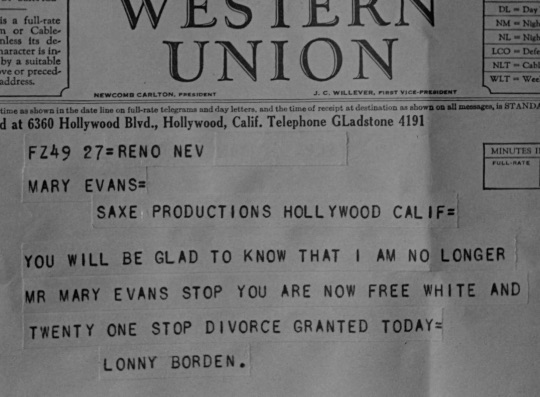 It's the second line that caught my eye. I first noticed it back in 2009 when watching “I Am a Fugitive from a Chain Gang,” and, as I wrote back then, “The Worldwide Web isn't much help with the phrase.” Well, that was then. Now the phrase has a Wiktionary entry and an entire Jezebel compilation video of different actors saying it, or mouthing it in silent pictures, over the years. It was such a well-known phrase that it allowed for variation and puns: Not just slight variations like “free, white and 45” (“Dinner at Eight” (1933)), but “married, sunburned and forty-one” (“Foolish Wives” (1922)). Everyone knew it that well, apparently.

What did it mean? It meant master of your domain. It meant what Henry Fonda says after he says the line to Bette Davis in “That Certain Woman” in 1937: “I'm gonna lead my own life.”

A little while ago you said you were free, white and 21. That didn’t mean anything to you—just an expression you‘ve heard for a thousand times. Well, to me it was an arrow in my gut.

Shame Jezebel didn’t end with that one.

It would be nice to say that the phrase died out because white people became a little more race conscious during and after the civil rights movement, and, sure, that's probably part of it. But more, I think it's the assumption of it, tossed out blithely: “Free,” of course; “21” and thus unentangled. And “white”? Because only white people had the opportunity to be free. And after the civil rights movement, that assumption, blithely tossed out or not, didn't feel so freeing.