It’s got a great premise—particularly for early 1930s Warner Bros. 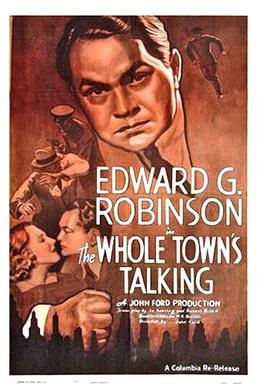 If Hollywood made it today, it would become a “worm turns” movie. That’s what I assumed this would be. Maybe Jones is mistaken for Mannion, or maybe Mannion threatens him and menaces his family and friends; and that’s when Jones finally develops courage and initiative and shows the world what he’s made of.

This is particularly odd given that the female lead, Miss Clark (Jean Arthur), the gum-crackin’, wise-talkin’ gal in the office, thinks he’s more than a mild-mannered clerk. Later in the movie, she’ll tell the others in her office, “I always told you that rabbit had something.” Except he doesn’t.

The police don’t come off well, either. A patron at a restaurant fingers Jones as Mannion, and cops show up and haul both him and Miss Clark away. They interrogate both. He’s nervous, she’s cracking wise. When they realize they’ve got the wrong man, and that they might keep getting the wrong man—i.e., others might finger Jones as Mannion—the D.A. (Arthur Byron) gives him a signed letter to show to any police officer, saying, in effect, “Don’t worry; this man isn’t Mannion.

(Fingerprinting? No mention of it. Even though it had been around for decades. See: “Pudd’nhead Wilson” by Mark Twain.)

Of course, Mannion gets wind of the exculpatory letter and shows up at Jones’ apartment and takes it. Now he can move around town at his leisure—and in broad daylight, too.

Jones has also been writing columns for the local newspaper about his experiences; but now Mannion is dictating them. He’s telling his story, see? He also uses the letter/resemblance to get into local prison and murder a rival, “Slugs” Martin (Edward Brophy), who was ready to squeal on him. Then when Miss Clark visits Jones and figures out it’s Mannion, they nab her. To where? Both she and Jones’ aunt are locked up in the gang’s basement hideout, but we don’t find that out until the final reel. She just disappears from the film. Our best character.

How does Jones win? Luck. He shows up at the gang’s hideout, they think he’s Mannion, and when the real Mannion comes through the door he orders the gang to plug him. They do. They kill Mannion thinking it’s Jones. Then cops, etc.

Arthur is good, of course, but it’s Robinson’s movie. He plays ineffectual fine but it’s when he shows up as Mannion, with those dead, killer eyes staring at his doppelganger, that you realize just how good he is.