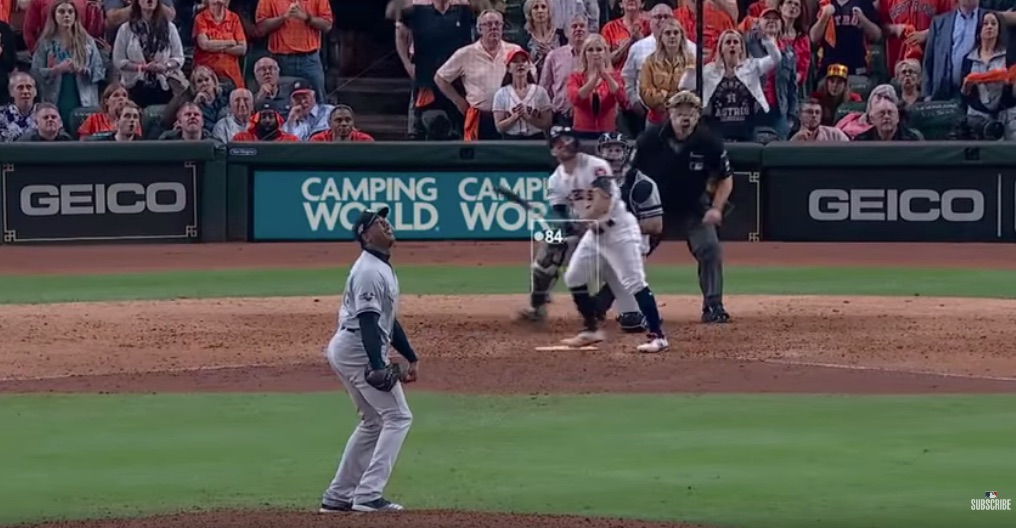 I missed it, but Altuve didn‘t.

So it’s over. The giant frachise with the giant outfielder (6' 7“, 282-pound Aaron Judge) was sent home packing, while the small-market team with the small second baseman (Jose Altuve, 5' 6, 165) continues on to the 2019 World Series on that player's giant, 2-out, bottom-of-the-9th homerun—the first series-ending walkoff HR against the Yankees since Bill Mazeroski went deep against the Casey Stengel-led Evils to end the 1960 World Series.

And I have mixed feelings.

Oh, I'm happy. No doubt. This is waaaaay better than the alternative. A dark shadow has passed. I have a bounce in my step again. More, and I‘ve been finger-crossing for this for the last few years but now I can say it aloud: this decade is the first that won’t see a Yankees pennant since ... the 1910s:

That's why we hate them. And that's why this is a great moment.

And in what fashion they went down! An early Astros lead (3-0), the Yankees chipping away (3-2) but the Astros holding them at bay with great defense (Brantley, Reddick, Altuve, Correa), until, in the 9th, two outs away, Astros closer Roberto Osuna gave up a 2-run shot to DJ LeMahieu that looked like it should‘ve been a can of corn but kept traveling and traveling and barely went out over the outstretched glove of George Springer in right to tie the game, 4-4. Shock, silence. But Osuna gathered himself and got the final two outs, which left the Astros batters facing the Yankees’ 103-mph fastball closer Aroldis Chapman. He got two quick outs. Then he couldn't get his fastball over. He walked George Springer and went 2-0 on Altuve (both fastballs that weren't close), before catching the plate with a slider. So his next pitch was a slider. Which Altuve figured. And deposited it in the left-field bleachers. And as the shortest man with the biggest heart in baseball calmly rounded the bases amid absolute, joyous chaos in Houston, the New York Yankees, the Evil Empire, the giant monster with the monstrous collection of pennants (40) and rings (27), had the stake pounded in its black heart for another baseball season.

How could I have mixed feelilngs about that?

Because I didn't watch it.

It wasn't like I had other plans, either. I had none. I purposely avoided it. I did what I did in Game 7 of the 2017 ALCS, which is to maintain radio silence, internet silence, avoid even potential peripheral contact with the game via Twitter or FB or my phone, because back then it seemed like any marginal contact on my part would result in the Yankees suddenly having life. I'd check the score on ESPN.com, and the Yankees would be behind (yay!) and then suddenly they wouldn't (shit!). This kept happening, too. So I avoided it all for Game 7 of 2017, which the Astros won, and I avoided it again for Game 6 this year. I told myself, ”If you avoid it completely, and the Yankees still win, then watch Game 7.“ Instead, because of my superstitions, the, yes, insane superstititons of the tightly wound baseball fan and inveterate Yankee hater, I missed one helluva game.

You‘re welcome, Astros. My sacrifice is your pennant.

Speaking of: That’s the Astros third; and they‘re playing a team that just got its first. Odd position for the ’Stros. They began in 1962 named for a gun (Houston Colt .45s), played in an artificial monstrosity (the Astrodome), then moved to a baseball-friendly park that for a time was named after an infamous, era-defining financial scandal: Enron Field. Of the 30 MLB franchises, they were the 26th to see a World Series, and it took them longer to get there (their 44th season) than any franchise besides the Senators/Rangers, who didn't win one until their 50th season in 2010. When the Astros won their second pennant in 2017, they took on a team with 19 pennants. They‘ve always been the underdogs.

Now, not so much. Startlingly so. After this run, they have the most postseason appearances by any expansion franchise (13), and the No. 2 team isn’t close (Angels: 10). Hell, they have more postseason appearances than one of the original 16 teams, the Chicago White Sox (9), who had a 60-year headstart. This third ‘Stros pennant puts them in sole possession of third place among expansion pennants, behind only the Royals (4) and Mets (5). And if they win the Series, they’ll be tied with the Royals, Mets, Blue Jays and Marlins for most World Series championships by an expansion team (2).

Now look who they‘re going against: a city that hasn’t seen a World Series since 1933 and a franchise (Expos/Nationals) that has never seen one, and who took longer to get to the Series (their 51st season) than even the Rangers. Yes, the Nats now have that record in futility. Indeed, the only team that can beat that record, i.e., the only pennant-less team left in baseball, is your Seattle Mariners, who begin their 44th pennant-less season next year.

That said, not sure who I'm rooting for this World Series. This will be the second Series with two expansion teams (Mets-Royals, 2015), and I like both of them. It's a matchup of the stellar starting pitching. In terms of regular season bWAR, the Astros are fielding the No. 1 and No. 5 starters (Verlander, Cole), while the Nats have the No. 6 and 9 guys (Strasburg, Scherzer), and the difference is slim. Right now I just want a Game 7.

”Outlast"? Way to hype it, boys. (And it turns out NYT has done this before.) The inside gets closer:

BTW: Here's how the Yanks went this entire calendar decade without making the World Series: