The History of Spider-Man on Screen

Not to sound like an old fart, but when I was your age we didn’t have Spider-Man movies.

We didn’t have superhero movies. I began collecting comics when I was 10, with Spider-Man No. 123, and, at the time, in the summer of 1973, there may have been a “Super Friends” cartoon on Saturday mornings but that was it. Besides, “Super Friends” was DC, not Marvel, and it was obviously made by people who weren’t aware of the changes Stan Lee and others had wrought in the comics industry.

Marvel superheroes had real problems (girls, money) and lived in a real place (New York City). Some didn’t even want to be superheroes. Even if their powers weren’t a curse, as they were for the Thing and the Hulk, they didn’t exactly make their problems go away. Just the opposite. 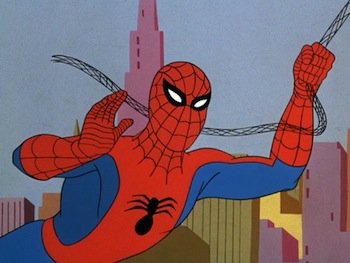 You could argue that Spider-Man was one of their least unique creations. Yes, he was the first solo teenage superhero, and, yes, he lost as Peter Parker as often as he won as Spider-Man. But unlike most Marvel characters he operated within the traditional superhero framework: He had a secret identity and prowled the night in search of crime. Of course there were twists within this formula.

Peter Parker, like Clark Kent before him, was a nerd. But Clark’s nerdiness was a pose — a way of deflecting attention away from his super self — while Peter actually was a nerd. He asked classmates to go to a science fair with him and sobbed when they mocked him. If a radioactive spider hadn’t come along, he’d still be dateless and clanking test tubes in a lab somewhere.

As for prowling the night in search of crime? Most superheroes did it just cuz. They were descendants of a tradition in which a masked hero fought injustice in an age of despotism: Robin Hood, the Scarlet Pimpernel, Zorro.

Batman was the first superhero to actually have a psychological motivation for fighting crime. As a child, he saw his parents killed before his eyes and so does what he does out of a deep-seeded need for revenge. He wants to get the bastards. That origin was written in 1939 and no one improved upon it for over 20 years until Stan Lee wrote about Spider-Man in Amazing Fantasy No. 15. When Peter Parker’s Uncle Ben is killed by a burglar, Spider-Man, seeking revenge, gets the bastard, then realizes the killer is a petty crook he had the opportunity to stop days earlier, but, out of selfishness, hadn’t. “If I’d only stopped him when I could have!” he cries. “But I didn’t. And now Uncle Ben is dead...”

So Spider-Man fights crime less for revenge than from guilt. He’s trying to cleanse himself as much as society. The tragedy is he never can.

A nerd overwhelmed by guilt. No wonder I identified. 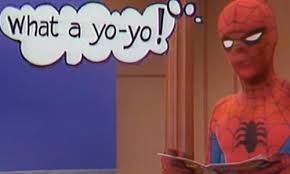 Holding out for a hero

Part of the reason I’d grabbed that copy of Spider-Man No. 123 were memories of the “Spider-Man” Saturday morning cartoon, which aired from 1967 to 1970, and which I’d liked. But beyond its jingly theme song (“Does whatever a spider can...”), it hasn’t aged well.

During its first season there are only three recurring characters: Spider-Man (whose catch-phrase is “Wallopin’ websnappers!”), Betty Brant (who just wants to get engaged) and J. Jonah Jameson (who’s forever slamming doors and complaining about “lazy teenagers”). A few supervillains are true to the comic (Doc Ock, the Vulture), while others seem lifted from a Scooby Doo mystery (Parafino, the Fifth Avenue Phantom). The shots of Spider-Man web-slinging around town are used ad nauseum, while the chief action, from both hero and villain, is ducking out of the way of thrown objects. Fun.

Ralph Bakshi produced the final two seasons and he gives us some cool, moody, Manhattan backdrops. But each half-hour is one long story rather than two short ones, and it’s stretched out interminably with even more web-slinging around town. It’s like torture.

Still, in the summer of ’73, I would’ve gladly been tortured. We had nothing — only “Super-Friends,” with its watered-down version of the Justice League of America. Does Hong Kong Phooey count as a superhero? We grabbed at anything. We were desperate. We heard there was a Wonder Woman TV movie, but when it aired she was blonde and wore a track suit and hardly did anything super. I stayed up late one Friday for a TV version of the Broadway musical, “It’s a Bird, It’s a Plane, It’s Superman!,” but it was campy and Superman’s hair was poofy and he hardly did anything super. A “Doc Savage” movie was released but it was low-budget and campy.

I watched “The Electric Company” hoping they’d include one of their live-action, comic-panel “Spidey Super Stories,” in which Spider-Man spoke in word balloons and battled villains like the Blowhard, the Prankster and the Spoiler. At least it was educational.

Then one day I saw a promo for ... could it be? ... a live-action, prime-time Spider-Man TV show? Wow! A guy in a Spider-Man suit was being pulled up the side of a skyscraper while he mimed a spider-ish climbing motion. It looked like the coolest thing in the world.

It wasn’t. Nicholas Hammond, late of “The Sound of Music,” was too pretty, his hair too poofy, to play Peter Parker, while Robert F. Simon was too avuncular for J. Jonah Jameson. Meanwhile Spidey looked like he was wearing Batman’s utility belt, his web-shooting looked more like rope-shooting, and the climbing-up-the-building thing? Slow going. Like it was work. The show was so bad even I stopped watching.

“Superman: The Movie” began to change things. It was epic in scope and they got the exact right guy for the role. It was also the second-highest grossing film of 1978, so studio execs took notice. Unfortunately they took notice in the wrong direction; not toward “Spider-Man” but back to other 1930s icons: the supercampy “Flash Gordon” and the supercrappy “The Legend of the Lone Ranger.” It took another 11 years before Tim Burton’s “Batman” blew away the box office, then another 11 years before the Merry Marvel Marching Society marched onto Hollywood for good. 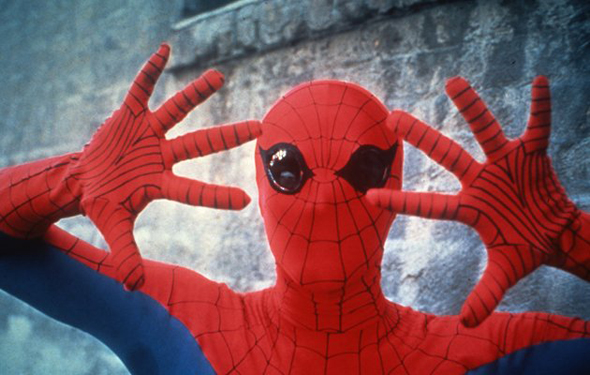 Better than the comic book

Now it seems we get a superhero movie every other month (“Spider-Man,” “X-Men,” “Fantastic Four,” “Ghost Rider”), with more on the way (“Iron Man,” “Captain America,” “Thor,” “Luke Cage”). “The Adventures of Forbush Man” must be just around the corner.

The irony is that I’ve long stopped collecting comic books. How’s that for luck? When I was a kid, comics were for kids and movies for adults. Now that I’m an adult, comics are for adults and movies are for kids. Peter Parker would understand.

The greater irony is that Hollywood finally got it right. The first two “Spider-Man” movies are about as good as superhero movies can be. Not only is Tobey Maguire the exact right guy for the role, not only does director Sam Raimi give you the vertiginous thrill of web-slinging through midtown Manhattan, but the movie is infused with the spirit of the comic book. Peter Parker loses as often as Spider-Man wins. He’s picked on (in high school), ripped off, ignored (by girls).

Hell, they improved upon his origin. How amazing is that? When the petty thief runs by Spider-Man in Amazing Fantasy No. 15, we recognize that Spider-Man’s refusal to help is the act of a selfish jerk. “From now on I just look out for number one — that means — me,” he tells the cop. We don’t identify with Peter here. He’s not us; he’s other.

In the first “Spider-Man” movie, however, that petty thief rips off the wrestling promoter who has just ripped off Peter Parker. The promoter refuses to pay Peter his $3,000, saying, after Peter tells him he needs the money, “I missed the part where that’s my problem.” So Peter leaves, the petty thief appears, steals the money, and runs down the hallway with Peter between him and freedom. He gets freedom. When the promoter complains, Peter tells him, “I missed the part where that’s my problem.”

Here’s how brilliant that is. When I saw “Spider-Man” in a crowded movie theater in 2002, moviegoers, who obviously didn’t know where the story was going, who didn’t know this was going to be the saddest moment of Peter Parker’s life, actually laughed. They’d been trained to expect put-down quips from their action heroes, and this was a better quip than most. Haw! Told him! The laughter was indicative. We identify with Peter here. He’s not other, he’s us. He’s getting back at a guy who deserves it. Thus when the horrible lesson is imparted, it’s imparted to us, too. With great power comes great responsibility. It’s a lesson our popular culture doesn’t deliver much. 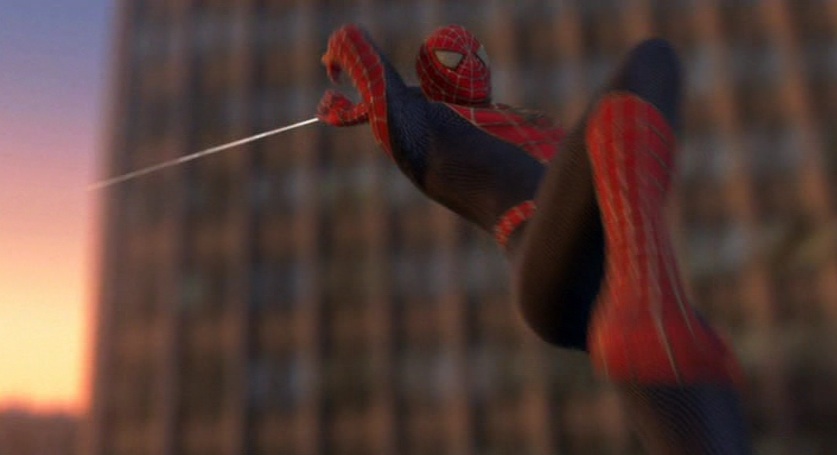 Worse than the comic book

So why was I nervous before the “Spider-Man 3” screening? I’m 44 now, my comic-collecting days ended long ago, and the Spider-Man franchise is in good hands. Why be nervous?

Part of the problem was the happy ending of “Spider-Man 2.” He’s got the girl, he’s got the power, he’s got it all. So what’s the emotional momentum of the next movie? Toward greater happiness? Or do you take stuff away? Either route is problematic.

Initial reports were worrisome, too. An evil Spider-Man? Didn’t the evil Superman in “Superman III” help kill that franchise? Then the villains began to mount up: Sandman and Venom? And Green Goblin? And evil Spider-Man? Isn’t that a bit much? Didn’t all those supervillains and heroes clunking together help sink the ’90s “Batman” franchise?

But I was most nervous about something I’d seen in the trailer: A policeman informing Peter and Aunt May that Ben Parker had been killed, not by the petty thief, but by Flint Marko, who would later become the Sandman. I thought: Naw, they wouldn’t do that. Surely they know that changing who kills Ben Parker changes Spider-Man’s entire raison d’etre. It messes with the greatest origin in comics. Surely they know better.

Now that I’ve seen the movie, I’m curious. Obviously “Spider-Man 3” will make tons of money. But are moviegoers smart enough to see through all the CGI to a story that has no arc, no momentum, that just pinballs here and there, lighting up this and that?

Something comes between Peter Parker and MJ — but what? Misunderstandings? The machinations of others? Or are they just not right for each other? Something blackens Spider-Man’s heart — but what? MJ? Revenge? Symbiotic space goo? For most of the movie Peter Parker isn’t us, he’s other, but the reasons why he’s not us are never interesting. Worse, the movie takes apart his origin only to impart its lesson in a groaningly obvious way. In short: It’s a travesty.

—The only crime Erik Lundegaard fights is grammatical. This article was originally published on May 3, 2007 on MSNBC.com.)