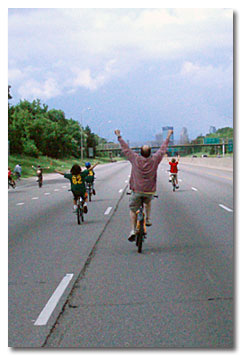 It was a cool Friday evening in June and I was planning on riding my bike to Jim Walsh’s final hootenanny of the season some 30 blocks away — it was a perfect evening for a bike ride — but a friend was tagging along, she was bikeless and we were going to dinner afterwards. Cars were invented for this kind of thing.

As I got into my car to pick her up, I noticed a green piece of paper stuck under the windshield wiper. It was a notice from the Minneapolis Police Department — Traffic Control Unit. There’d been a complaint and my car had been chalked as abandoned. After 72 hours it would be tagged and impounded. The notice had been filled out 48 hours earlier.

The last time I’d used it was the previous Sunday, when I’d driven my brother, my father and my step-mother down to Arlington, Minnesota, for my nephew’s high school graduation.

After the graduation ceremony there was a gathering at the family farm, accessible only by dirt road, and when I parked my car that evening it had a light coating of dust on it. The street was crowded, too, so I parked a few houses further south than normal. Maybe the home owners there had never seen my car before. Maybe they were freaked by the light coating of dust. Maybe it looked scary to them. Who knows? The complaint was made, the vehicle was chalked, but, thanks to my bike-less friend, it escaped towing by 24 hours.

It’s sad, of course, that I don’t know my neighbors well enough so they know my car well enough so they won’t call the cops if it’s sitting in front of their house for 72 hours with a light coating of dust on it. But it’s the notice that gets me: “City Ordinance 478.250 prohibits any vehicle to remain upon any city street in excess of (seventy-two) 72 consecutive hours.”

Here’s what that City Ordinance implies. How could someone not drive their car for 72 hours? That’s like three whole days! What kind of freak would own a car and not drive it for three whole days? Someone call the cops, quick.

In retrospect I’m lucky this is the first time a green notice has been stuck to my windshield. I live in south Minneapolis and work in downtown Minneapolis. If there’s snow on the ground I walk to work (45 minutes); otherwise I bike (15 minutes). It’s easy. I lived in Seattle for 15 years and biked to work there and Seattle has hills and constant drizzle. Minneapolis just has wind and an occasional fierce thunderstorm and that cheap way to pave that leaves roads in summertime feeling like gravel pits.

Almost every week, in other words, I’m breaking City Ordinance 478.250, because almost every week, Monday to Friday, I don’t drive my car. It just sits there, not using gas. How dare it? How dare I? Don’t I know there’s gas to be used? How selfish can I be?

We had National Bike to Work Day last month. Notices were passed out and I think they added some extra bike racks in front of the Henn. County Government Center for a day and maybe a speech was made somewhere. I thought it was cute. Encouraging people to bike when they own cars and there’s all this gas to be used.

Recently on MPR they mentioned how Mayor Rybak or somebody is encouraging commuters to bike or walk to work. His budgets, he says, prioritize new bike trails. He calls Minneapolis the “No. 1 bicycle commuter city in America.” That’s cute, too.

Bike-commuting estimates are hard to pin down but for Minneapolis they tend to land in the 2-4 percent range. Meanwhile, in Davis, Calif., according to a recent article in The Wall Street Journal, 17 percent of its citizens commute by bike. Their city logo is a bicycle and they plan on building a bike-only tunnel under a major road. In Boulder, Colo., 98 percent of the arterial roads have bike lanes and 21 percent of commuters bike to work.

That’s just in the U.S. In Copenhagen, 33 percent of its commuters bike to work. In Amsterdam it’s 40 percent. Embarrassed by their low numbers, these cities are trying to encourage more bike commuting by building parking facilities that can hold up to 10,000 bikes and increasing prison-time for bike thieves.

That’s the direction they’re going in. The direction we’re going in? Drive your car once every 72 hours or we’ll take it away. Oh, and once a year we’ll have a “day” in which we “encourage” people to “bike.”

The hootenanny that night, by the way, was a hoot, and Jim Walsh’s younger brother, Terry, sang a song he’d written called “Bike Ride on 35W.” They’d closed a portion of 35W for construction a few weekends previous, and Jim, a crazy sonuvabitch, celebrated a double-header sweep for his sixth-grade baseball team by leading them on a bike ride onto that empty interstate. One kid yelled “Revolution!” as he flew down the entrance ramp. Jim’s daughter, Helen, shouted “This is the greatest day of my life!” as they claimed all that pavement.

Temporarily, of course. The cops came and Jim was handcuffed and put in the back of a squad car. Helen called through the window: “What should I tell MOM?”

Eventually they let him go with just a ticket. But it’s a nice dream, isn’t it? There was a just a moment and Jim grabbed it. Here’s what Terry Walsh sang:

That’s another direction to go in.

—originally published in The Minneapolis Star-Tribune